It is the season for awards for children's literature. Gold and silver medals are raining down from heaven and sticking onto the covers of a few books. I had a little site that rounded up the "mock" award lists from around the country. Lets' see how they did at predicting the major award winners.

I took the top 15 titles from each of the roundups (Caldecott, Newbery and Printz) to see how many won awards and which ones they won. I wanted to include results here, but frankly the formatting is a nightmare. Check out the lists at http://sites.google.com/site/inablueroom/ to see more.

The Mock Caldecott lists did the best at predicting award winners. Nine of the top 15 titles (by number of mock mentions) won 12 major awards- including my own shiny silver Zolotow Honor for "In a Blue Room." AND Top Roundup vote getter "A House in the Night" took the Caldecott Medal.

The Mock Newbery Roundup didn't do as well. Of the top 15, only 4 title took a total of 5 awards.

We didn't have much participation in the Mock Printz roundup. I guess because the award is newish, or maybe because it is for older readers? In any case, all four Printz Honor winners were on the roundup, but the winner, Jellicoe Road, was nowhere to be seen.

Next up: The Notables and SCBWI's Golden Kite, among others.
Posted by Jim at 1:47 PM No comments: 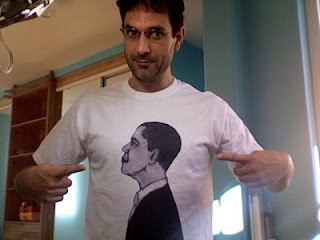 And we'll do it in this cool Obama shirt by Yuyi Morales.

Happy Inauguration Day, everyone.
Posted by Jim at 10:27 AM 1 comment:

In a Blue Room has been named one of five recipients of the Charlotte Zolotow Honor Book Award for picture book text. This is so exciting! Here are excerpts from the press release:

How to Heal a Broken Wing by Bob Graham is the twelfth annual winner of the Charlotte Zolotow Award for outstanding writing in a picture book. The award is given by the Cooperative Children's Book Center, a library of the School of Education at the University of Wisconsin-Madison.

Established in 1998, the Charlotte Zolotow Award honors the work of Charlotte Zolotow, a distinguished children's book editor for 38 years with Harper Junior Books, and author of more than 70 picture books, including such classic works as Mr. Rabbit and the Lovely Present (Harper, 1962) and William's Doll (Harper, 1972). Ms. Zolotow attended the University of Wisconsin in Madison on a writing scholarship from 1933 to 1936, where she studied with
Professor Helen C. White. The award is given annually for outstanding writing in a picture book for children in the birth through seven age range published in the United States in the preceding year.
Posted by Jim at 10:12 AM No comments: