I had an interesting facebook experience today. In my newsfeed was a profile pic update by a 'friend." In this case, she wasn't someone I actually know, but one of many friends who are probably more accurately described as "fans." She is apparently a Christian minister of some kind. Here's a shot of her new profile pic: 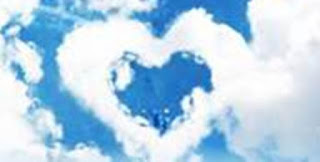 Accompanying the picture was a story she told about how she was going to the cardiologist for some heart health issues. She was afraid-- until she looked up and saw that God had provided her this sign in the sky. She presented this as a true story that had happened to her.
Now I do a lot of my illustrating in Photoshop and can usually spot an image that's been created there. Some people are pretty good at it, but this one was obviously faked. Plus, I wasn't sure why God would appropriate a symbol more likely used by Hallmark than any diety. So I did a google image search and found this image on a dating site: 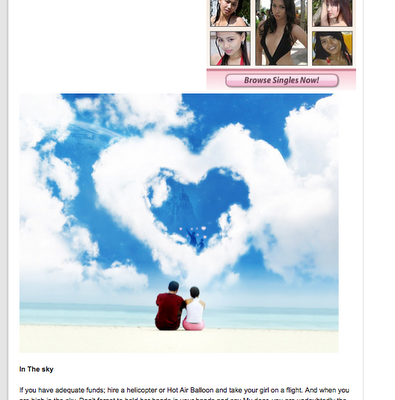 There are human silhouettes and a building inside this image, which she has blurred out in her profile pic. And, of course, she cut off the people on the beach. I challenged her in a comment. Why, I asked, would she make up a story- lie - to promote her faith? I didn't mention that she also stole an image and presented it as her own. She didn't answer, but she did update her pic again and removed the post that told the cardiologist story.
What does this have to do with writing?  Well, I'm working right now on a YA novel that explores questions of faith. This facebook post got me thinking about belief and faith. Why do people make up these sort of "miracle" stories to justify or defend their faith, and why do other people believe them? Were the visions of prophets recounted in the bible, from the wheel of Ezekial to the Book of Revelations, once just ancient versions of someone's "god-heart-cloud-in-the-sky' facebook update? How many ministers today make up these kind of bogus stories to console/guide their flock (or to fleece them)? Why do people feel such an urge to make Jesus a sort of "super magician in the sky" instead of listening to his message, which is basically "love one another?"
Are you a believer?  What do you believe and why do you believe it? Are you a skeptic? Why? Have you ever had an miraculous experience, or fallen for a bogus miracle?
Tell me.
I'm curious.

Hi Jim, I just came across your site after hearing your gratitude quote on Katie Davis's Brain Burps About Books podcast. Your work is amazing! Yes, I'm a believer, a Christian. There's more info on my 'About Me' page on my website at the bottom. If you'd like to know more, please let me know. Best wishes with your YA novel.
Blessings!
Kathy
www.kathleenrupff.com

Jim- Wow! I wish I was surprised by your experience. Thank you for posting it and asking the question sincerely wanting to learn something that (gasp) might even change your mind. Something your 'fan' is most likely afraid of. I hope you made her stop and think.

What I believe? I believe that we are born inherently knowing good from evil, and that we are taught to be narrow minded and exclusive. In the context of religion, thinking is not what 'believers' are taught to do. They are taught to fear; their thoughts, their gut and the of course unknown. When I was a Christian (believer) there were clever explanations that cloaked that fact and truth be told, it was comforting and frankly easier to follow the recipe book. Perhaps it's simplified in the old story, 'The Emperor's New Clothes.' Maybe there's an idea for a kid's book. (I should put it on my author/illustrator bucket list.)
Anyway, due to some life circumstances out of my control in my small world I was forced to start thinking for myself. It was as if a fog lifted as I began to trust my own intelligence. Ironically, I saw the light! I am in control of my behavior. I have choices and I am responsible for them. Bad things happen to good people and vise versa. I don't think things happen for a reason, but we can take situations, learn from them and make lemon-aid out of lemons. I believe life is a gift and we should pay attention! I believe this is it and I don't want to miss it.

I am very interested in the book you are working on.
I would love to learn more about it. Maybe I'll get a chance as we will both be at the Tahoe retreat next week. -Have a great weekend!

Hi Jim, your web site is impressive. I am a beginner at writing and in doing research I came across your site. I am a Christian. I always believed in God as a child but it wasn't until I was a young teen that I accepted Jesus as my Savior. I am now 53 years old and have never wavered in my faith. However, I have learned that there are many who sincerely believe many things that are just not in the Bible. I call it, "romanticizing God". In order to live a life that backs up their notion of God they make things up. For example, you may have heard that old saying, "God never gives you more than you can handle". This is not biblical. The Bible says, "No temptation has overtaken you except such as is common to man; but God is faithful, who will not allow you to be tempted beyond what you are able, but with the temptation will also make the way of escape, that you may be able to bear it." I Corinthians 10:13 This scripture is about temptation, nothing else. Misunderstandings such as this happens all the time. If you want good information on Christianity, go to the source, the Bible, yourself and read it cover to cover.

Learn about the experiments by MobiDev for transferring 2D clothing items virtual outfits.