I'm a luddite. I admit it. Months ago the kidlitosphere was chattering about this new thing called twitter. I completely dismissed the idea. I mean, what can a writer say in 140 characters? And the name...twitter... it sounded vaguely obscene.

But soon twitter was everywhere. All we were hearing was about congressmen tweeting at the State of the Union address and 9-year-olds tweeting that mommy had fallen down and she couldn't get up.

I realized that I was once on the cutting edge but now I'm a crusty old man who says, "Damn these kids today! How short is their attention span anyway?

So I am turning over a new leaf. I am at a social media with Lynn Hazen and Susan Taylor Brown. 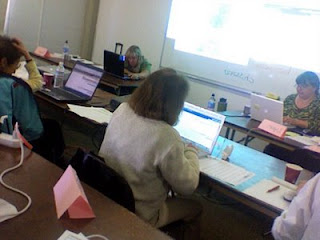 At least until I find it is taking too much time.
Posted by Jim at 11:17 AM

Whoo hoo!
Hee hee, Jim, check out my Twitter update. I'm keeping it there until you join.
http://twitter.com/LynnHazen

Glad to see you jumping on board. I am going to keep pondering your situation because I think the answer is out there.

Oh, and this line, I am embracing my inner twitterer, flickrer, facebooker, redroomer, tumblrer...whatever. I am linked in.

for some reason I could totally hear Deborah Lattimore saying, "Go ahead, Jim, tumble me."

I Twitter too, but not too much- it is too terrilbe to think about!