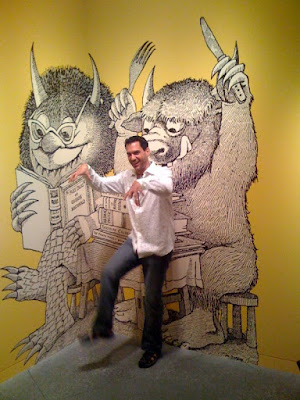 I'm pretty sure a similar image to this will be showing up on many Bay Area kidlit blogs, but I wanted to be the first. This is the entrance to the Maurice Sendak show at the Contemporary Jewish Museum in San Francisco. I don't have my wolf suit, but I am doing my best Wild Rumpus dance.
The show itself is fun, if a little small. ( I imagine that, with the Wild Things Movie coming out, the PR people have split up Sendak's enormous body of work for viewing in cities around the US...but I could be wrong.) The space is filled with Sendak's original art for his many beloved books including Where the Wild Things Are, Outside Over There, and In the Night Kitchen. The exhibit focuses on "the other story" that Sendak's art brings to the stories he illustrates, which seems to mostly involve the Holocaust and the fragility and vulnerability of children. As a picture book writer who has heard from more than one of his colleagues about their editor telling them their story is too "scary" I wonder if Sendak would even be published today.
The exhibit also features several 3 or 4 minute video interviews with Sendak and a timeline of his life. Most of the information I already knew, from reading and studying about Sendak in the past. But I did learn a thing or two. Did you know that the Wild Things have names? Apparently, Sendak named them after relatives. Moishe and Bernard are the ones mentioned in the show. I think those are the two I am pictured with above. Wikipedia lists the others as Tzippy, Bruno, and Emile. In one of the videos Sendak mentions that he named the ugliest WT after an uncle he despised. After The Lindbergh baby kidnapping/murder, young Maurice was afraid to sleep without his father guarding his room. The despised uncle once told Sendak's dad "who would want your kids, anyway?" Sendak apparently still holds a grudge about this admittedly insensitive remark. He says he lost a couple of cousins over his creation of the Uncle/Ugly Wild Thing.
Another new bit of info was that Sendak is gay and had a 50 year relationship with a man who recently died. He came out in 2008. Now I always figured he was gay from reading between the lines of articles and books about him, but I had no idea he just came out.
I left the exhibit delighted but also a little sad. I mean a 50 year closeted romance and a 70 year grudge just seem kind of....sad.
Posted by Jim at 8:40 AM

I loved this post JIm! Especially the picture of you doing the 'Wild Thing"! I did know that MS was gay, but I don't remember how I knew that. Maybe it just seemed obvious to me, but I didn't know about his 50 year closeted life- that is very sad.

I've been reading Selma G. Lanes' The Art of Maurice Sendak. It has in depth chapters about all of the things you mention here and a ton of artwork. It is so, so fascinating. I am beside myself with excitement about the upcoming movie and hope a similar exhibit makes its way to Texas. :)

Have you seen the time-lapse video of a muralist painting a kid's room with the Wild Rumpus? (Yours is pretty good by the way!) It's fantastic! http://bit.ly/R7dXD

I am commeting here because it appears that your "In a Blue Room" blog may be inactive. I just want to tell you what a magical story you have created.

I take my 3 year old triplets on weekly visits to our local library which is where we found your book. My children were absolutely captivated with the story, as was I. What an enchanting tale.

Congratulations on your first book!
We hope many more are to follow.

The borrowed copy is soon due, but I plan to purchase one for our home library.